AM: The first item in my book is a poem written and published, to my great surprise, in our school magazine in 1964. I enjoyed, in the Acknowledgments, being able to cite that this was also published by 'Weymouth Poetry Sheets'. These were your creation. Can you say a little about their origin and format?

RD:  Well Andy, it came about after I had read ‘Dharma Bums’ by Jack Kerouac which introduced me to Zen Bhuddism and the American Beat Poets. I read about Beat Poets holding poetry sessions at Venice Beach and I thought “we could do that, Weymouth’s a beach town too”. I was used to printing on an ink duplicator and so got some friends to let me print their poems on foolscap sheets and sell them for a penny on the beach front. Len the potter let me place them on his shelf in the alleyway where he threw pots and I guess people who watched him but didn’t want to buy a pot bought a poetry sheet as a gesture.

AM: This all comes flooding back, the summer of 1965 and the brilliance of the seaside colours. I was terrified that somebody would read my stuff and scoff at its immaturity and pretentiousness. But I also enjoyed the fantasy of being part of a ‘movement’, however tiny, parochial and tame it seemed compared to those American Beats. And, of course, seeing one’s own words in typewritten print was at that time a very rare and rather wonderful experience. I seem to remember that Len the potter had sold thirteen and sixpence’s worth of my booklet, ‘Hey You’, when he popped next door for a coffee and somebody nicked the takings. 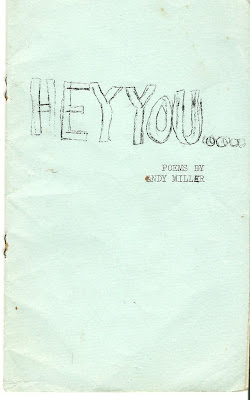 We first met at school when I was about 12 or 13 and you were a couple of years older. Like me, you did science rather than arts subjects at A level. A lot was made of that divide then, C. P. Snow’s ‘Two Cultures’ and all that. Do you think your own writing and perhaps the books you chose to read were different from what they might have been as a result of formally studying subjects like biology rather than literature? What else were you reading at that time? 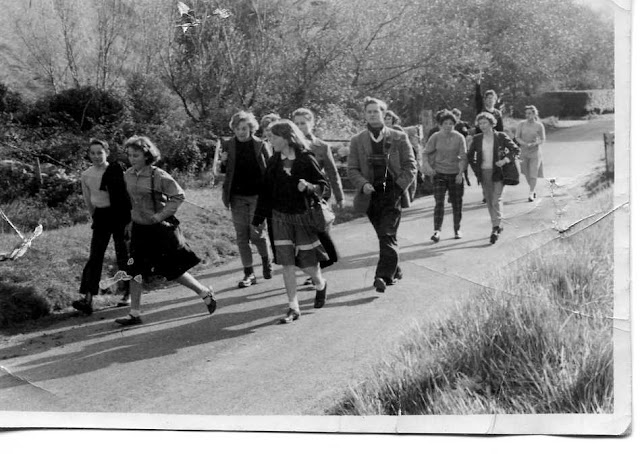 Last autumn I was asked by a friend if I would like to attend a weekend seminar on the Rhine, near Koblenz, and give a talk on Bob Dylan. I went and found a small group of people of various nationalities who came together occasionally to give talks to each other, to draw, paint and write and to explore a locality on foot. As we walked on the high plateaux on the western bank of the Rhine near the Lorelei Rocks, talking in twos and threes about the ancient and recent history of the region, Turner’s paintings of the river, and whatever, I was struck by how familiar and agreeable it all seemed. It was the Field Club – different people, different place and in a different time. When I later emailed this photo to these people they responded warmly to it, recognising an ethos and activity they all valued too.
Roger, we have been walking and talking for over 50 years. You were there with the 1964 poem at the beginning of my ‘Giants’ book and you have very recently joined me on the South West Coast Path, with which my book ends. Thank you for the stimulating company over so many years.