Men and women and the rock

'Martin, I'm stuck.'
‘You’ve got to get higher.’
‘But I’m stuck, I can’t get anything for my feet!’
‘You’ve got to get –‘
‘I know. I can’t –‘
‘Valerie ....’
‘Oh, hold me!’
Why do they keep doing it? Men and women on the rock. It’s excruciating to listen to; his booming insensitivity and her helplessness stoking up resentment. You read about hard women climbers, you enjoy the company of strong-minded female colleagues at work and then you come out to a crowded weekend crag and find the old Tarzan/Jane routine as strong as ever.

My mate and I looked at each other. We had hoped to snatch a late season Sunday on Stanage Edge but had arrived to find fifty-seater coaches in the lay-by. It was ‘Freshers Weekend’ and huge, orange crocodiles from the local universities were winding up through the bracken. There were loud groups on the boulders, young men straining in their enthusiasm and girls closed together in groups of two and three. The leaders and their rivals were readjusting their positions in a jangle of new gear and the summer’s adventures.

‘The blunt arête is a serious lead’ – that was how the guide book described my route. We both knew what that meant. I was half way up with one shaky runner and that would be my lot. Not my sort of route, but I was on it now. Suddenly, from the gaggle of late adolescence below, a youth shot up behind me. As he came level I told him that there was not room for two. My second moved slowly in beneath me, alerted but saying nothing. The youth tried to force his fingers into the same small pocket as three of mine and I snapped that it was my only good hold. Breathing fast, but with no conversation, he was past me and I was cowering beneath his uncertain progress up the rest of the route. By the time I reached the top, in a mixed state of anger, fear and self-righteousness, he was already down and tying himself to a young woman in borrowed boots. And all the while, the embarrassment of Martin and Valerie dragged out the afternoon.

Had we been the same? I look at the twenty-year old photograph, putting names to the young figures beneath the Idwal Slabs. That old friend is far away, still missed and only seen occasionally. This one lost us in Tokyo, a number of broken hopes left behind as she journeyed eastwards. This stooping young man was expelled in disgrace from the teaching profession and I married the thoughtful girl in the woollen hat. There were beginnings in that group; we had climbed parallel faults and strained in silly harmonies together. There were secret lines across the circle around the fire and an awkward arithmetic in the two-person tents. Men and women, boys and girls, growing up on the rock. 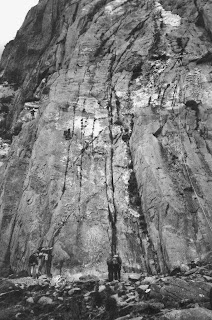 (Photo. Idwal Slabs)
(NB. Photos have been added to this blog and do not appear in the published 'While Giants Sleep')